Special Exhibits » The Building of West Philadelphia: An Historical Survey of Suburban Architecture » Seeds of Suburban Growth, Villages and Institutions

In the early 1800s two West Philadelphia land owners attempted a somewhat novel idea, to establish essentially residential villages. The first was by William Hamilton, gentleman botanist, who owned close to 500 acres including The Woodlands. Some of it was rented to tenant farmers, but Hamilton clearly recognized that the 1804 opening of the Permanent Bridge at Market Street offered new potentials for his property along the Darby Road (now Woodland Avenue). To capitalize on this, he divided a portion of his estate (north of Woodland Avenue) into parcels and had streets laid out for the village of Hamilton. It appears he thought the plots would appeal to buyers who wanted a country house or "villa". Another resident landholder, Judge Richard Peters, apparently had similar thoughts. Peters laid out the village of Mantua on his land between the Lancaster Turnpike and the Upper Ferry Bridge. Peters was Chairman of the Bridge Company when it built a wire (suspension) bridge at the upper ferry.

However there seems to have been little initial demand for the plots in Hamiltonville and Mantua. In fact, William Hamilton ended up exchanging some plots for work and materials on his own house; and Peters got builder John Britton involved as an owner of plots to be built on along Bridge (now Spring Garden) Street. One problem may have been that except for summer homes and country houses of the very wealthy, Philadelphians continued to live within short walking distance of where they worked (if not in the same building). Another problem may have been the means to finance construction. Unlike later ventures, the construction financing was handled by the purchaser of the plot. At this time in Philadelphia, land purchasers were either interested in building for themselves, or interested in land speculation (if the terms allowed). In general, only builders were engaging in speculative construction, and only on a very small scale during times of economic growth. Even this was restricted mostly to the city proper.

In the ensuing decades, Mantua and Hamilton eventually did grow into villages. Evidence suggests that they were essentially residential in character although businesses were not excluded. Perhaps a new found desire to escape the city helped these two villages. The Revolution, along with industrialization, immigration, and the slavery issue were breaking down the old social structures and fermenting turmoil. From the 1820s through the 1840s, disputes periodically erupted into major riots. The evolving economy gave rise to managers and factory workers, while squeezing journeyman artisans in particular.

But the spatial organization of the city was evolving slowly. While some industries set up factories, others continued to be based around small shops. Across the city was a fairly even spread of businesses, buildings, and peoples. Small buildings tended to be built on small streets between the bigger ones. Newcomers had to spread throughout the core and to the periphery. However some localization was occurring, and a primarily negro area developed on the south edge of town.

The house on the left is an example of the type of house built in Hamilton around 1840. In contrast, the houses in the middle image are more typical of mill village houses. These two dated from at least the 1840s. In locations of the County outside the city limits, the Philadelphia restrictions on wood construction did not apply. On the right is a house with a storefront. Living above one's shop or store was a continuation of long standing practice for tradesmen and shopkeepers. This particular building's sash, roof, and other visual clues suggest it could have been built the late 18th century and was later altered.

Because much of Blockley and Kingsessing Townships remained countryside, it was a convenient and scenic place to escape the city. This also made an ideal setting for institutions; especially charitable ones that wanted a pleasant and affordable location. In 1836 a new almshouse was built on Hamilton's land overlooking the Schuylkill River. This became known as the Blockley Almshouse. The Coroner's office is the last City presence on that site. A few years later the Pennsylvania Hospital’s Institute for the Insane was established on an large plot of land just north of Market Street. Part of this property today is Kirkbride and another portion is now Drexel ballfields. The Almshouse and Institute were but forerunners of the many charitable and educational institutions that later moved into West Philadelphia. 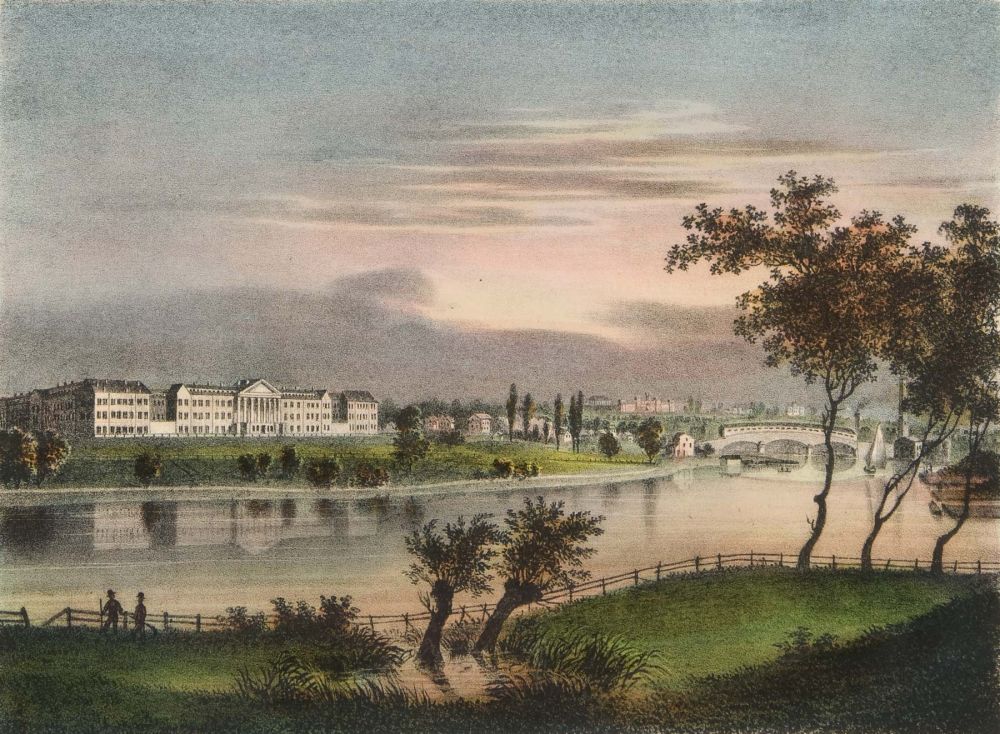 View is from the east bank of the Schuylkill, with the Market Street Permanent Bridge in right background.

A new use of land outside the urban centers was for 'rural' cemeteries. These new cemeteries provided the pleasant setting of a park (in response to changing ideas about mourning and memorializing) while simultaneously addressed health concerns about overcrowded city church yards. In 1840, Hamilton's house, by then empty over 10 years, and surrounding grounds were bought by the new Woodlands Cemetery Company. This move, led in part by Eli K. Price, saved the Woodlands Mansion and surrounding landscape by putting it to new use. An important feature of the Cemetery, the Almshouse, and the Institute for the Insane, was landscaped “pleasure grounds” for people to walk, contemplate and relax.

At the same time, Blockley and Kingsessing Townships were becoming dotted with farms, rural industrial villages, and commercial trade centers. Investors backed more bridges across the Schuylkill, a canal along the river, an inclined plane and rail road, and further turnpike improvements. By 1844 the area around the Market Street Bridge had grown dense enough that it was incorporated as the Borough of West Philadelphia. Maps from this time period identify numerous taverns, inns and hotels, notable estates, along with additional villages outside the Borough such as Maylandville (along what is now Woodland Avenue), Greenville and Hestonville (along the Lancaster Road). 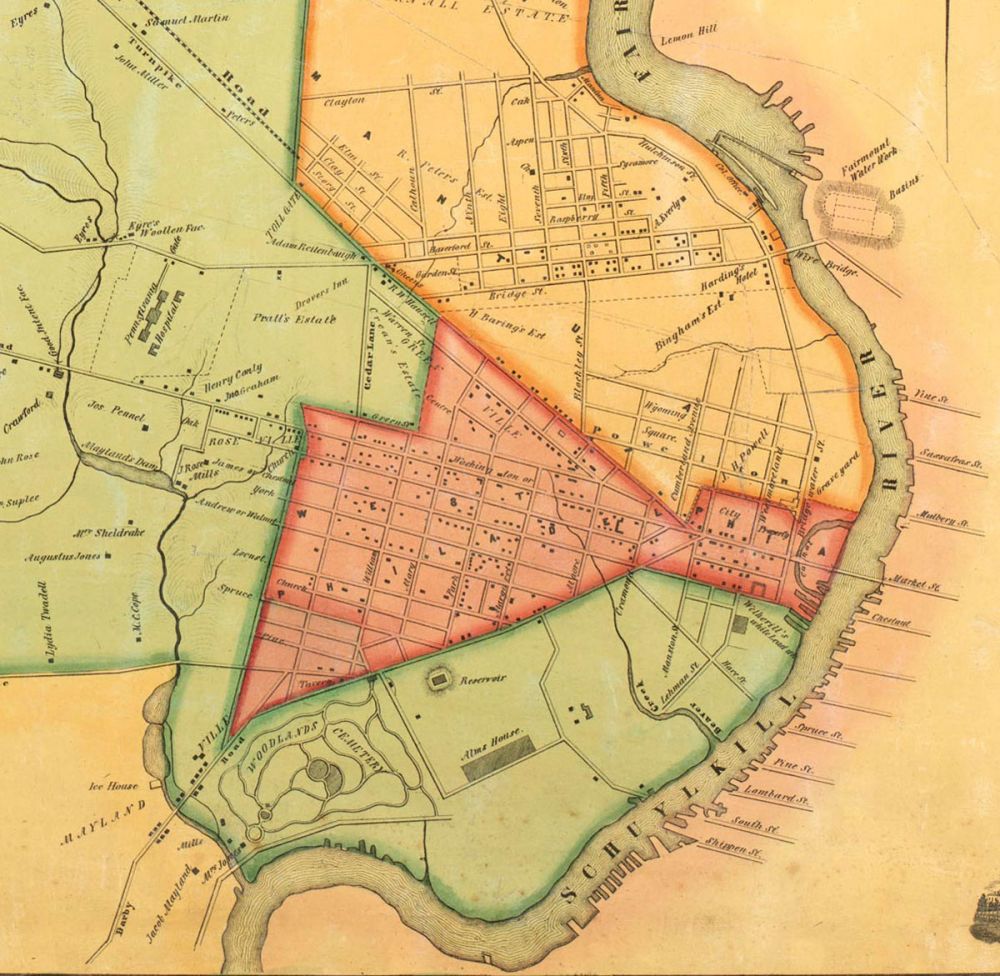 This map gives a sense of how the area was developing by mid-century.  The number of wharves along the Schuylkill River suggest the volume of commerce carried by the river.  Damming of the river at Fairmount not only helped answer the City's need for fresh water, but made the river more navigable upstream.  Canals allowed river traffic to get around the dam and the Market Street bridge.  Nevertheless, the West bank of the river has few wharves.  While the streets of Mantua, Hamilton and even some of Powelton have been laid out, many blocks have few or no buildings on them. In fact the concentrations of population are mostly around in commercial and industrial as settings such as Greenville, Maylandville, and Roseville.

By 1850, West Philadelphia had industry, commerce and rural farms, but it also had picturesque and scenic destinations, large estates, and pleasant residential areas. The Schuylkill River remained a barrier of sorts. There was still a toll at the remaining privately owned crossing points, and street cars, trains or carriages were too expensive for most people to use on a regular basis. However being separated from the city made it ideal for certain factories, the railroad yard, as well as institutions, river estates, summer homes, and for a few, residences to commute from. It was these residences in particular that helped plant the seeds for suburban development.

The Schuylkill River as a Dividing Line

The Schuylkill River as a Dividing Line

On the West side of the Schuylkill River (foreground) elements of industry are certainly present as well as pastoral spaces. In the center foreground is the Market Street "Permanent" Bridge, the major crossing point. By the time of this painting the bridge had been widened to also carry a railroad. A roundhouse for the rail road engines is visible just left the oval racetrack. To the right of the bridge are warehouses and docks, next are factories of Wetherhills Lead Works, and to the far right is the "Blockley" Alms-house and grounds. Further west (closer) are houses and shops of West Philadelphia. Along the opposite bank of the river is the water works and reservoir, and the old and new Gas Works.

Notable Remnants from the First Half of the 1800s