Special Exhibits » The Building of West Philadelphia: An Historical Survey of Suburban Architecture » The Success of Trolleys and Electrification

The Success of Trolleys and Electrification

In the mid-1890s the advent of electric streetcars, commonly called trolleys, heralded a new era in West Philadelphia. One important result of street car electrification was that it helped reduce the fare. This in turn made a daily commute affordable to a significantly larger portion of the population. Then, in 1907, Elevated rail service was completed. This dramatically changed the potential use of the whole Market Street corridor from 46th to 69th Street. Within two decades, strong retail centers evolved out from the El stops at 52nd and 63rd Street. In between, block after block was filled in with two story row houses.

While the area in general was becoming more crowded and less exclusive, there continued to be sections of wealthy, and fashionable houses. These were primarily single family houses. In part this was because the townhouse was on the decline as a symbol of status and taste; and that included suburbanized ones. At the same time, a new housing form, the apartment, was becoming popular. Where each type of house was built had a lot to do with convenience, precedence, and image. 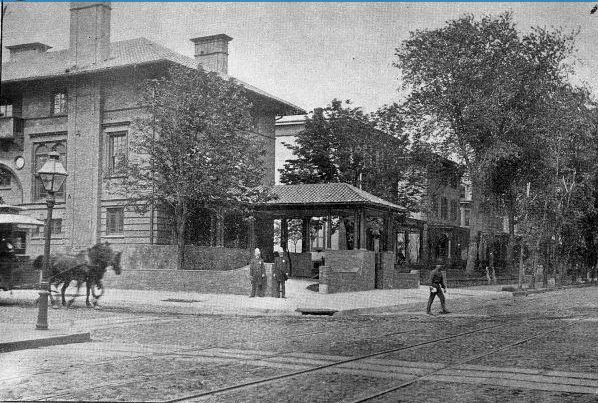 Northeast corner of Baring & 36th Streets in 1891. Wilson Eyre's Henry Cochran House partially in foreground. Eyre's architecture was slightly ahead of his time, especially in Philadelphia. In this example, one can see how the broad low rise roofs and flat planar surfaces of the house's main block help emphasis mass, and make no attempt to reflect the interior layout or uses. From Vickers, Philadelphia: The Story of An American City. 1893.

The City's new Market house on the South side of Market Street at 30th Street gives evidence to how important the Schuylkill River and the adjacent railyards had become for commerce. From The City of Philadelphia as it Appears in the Year 1893.

The rise of apartments is attributed to both societal and technological changes. These changes also impacted the function and nature of the pre-existing forms of dwelling houses. Where before single people lived with an extended family or boarded in house, it was becoming acceptable for respectable single men, and eventually women, to live alone. As a result, the trend was toward a more nuclear family (one set of parents and their children in the house). This meant less people in the house, and therefore required less space than a house with relatives, and/or boarders. A smaller house also required less servants; a boon to middle class families. Apartments fit the bill for people who could not, or did not want to, keep house or live in a boarding situation.

Advances in building technology and mechanical systems also played a critical role. They brought down construction costs and time, and helped make multi-story apartments feasible. To be practical, apartments required elevators, heat and water throughout. In many cases the mechanical systems of the previous decades simply had not been up to the task. Steam and hot water systems could provide heat throughout, while elevators made upper stories accessible to all with nearly equal ease. 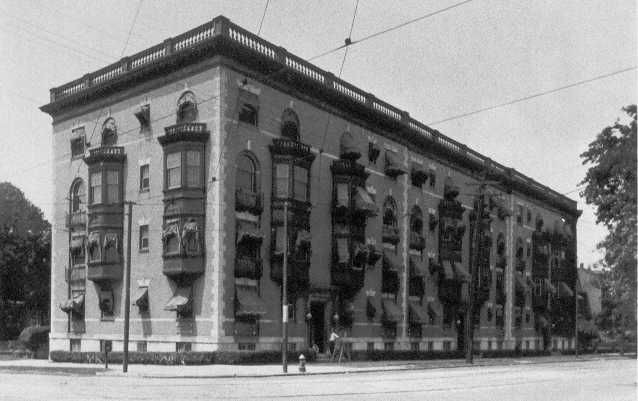 NW corner of 42nd St. at Chester Ave. photographed c. 1913. Note the use of hedges to visually separate the building from the street and provide a visual base. Philadelphia City Archives, photo 7883. 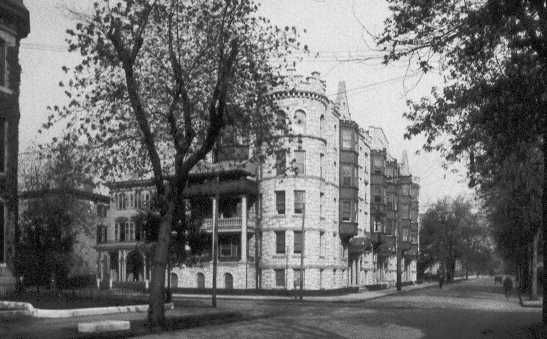 At the same time, the architecture was shifting to a mix of more academic and craftsman influenced design. Classical vocabulary again became acceptable for residences accompanied by the expression of colonial revival. Although this is sometimes hard to see in the exterior form of rowhouses, but even there, within the interior design and in the motifs the change is fairly obvious. There was a trend toward interior spaces that were less formally arranged, and generally more open. Pine floors and faux finishes gave way to hardwood floors and natural or plain painted finishes. The emphasis on the sublime gave way to the elegant on both the exteriors and interiors. 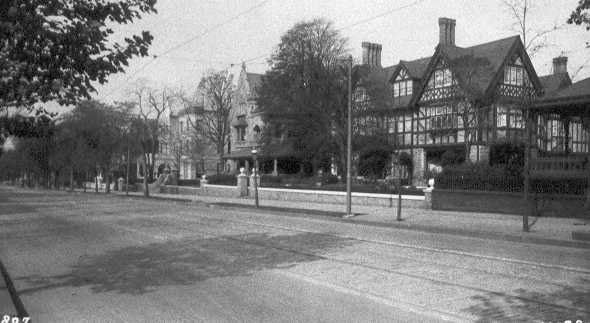 This 1912 photo shows that Chestnut Street remained a landscape of fashionable mansions well into the era of trolley electrification. By this time, the Market Street Elevated Railroad (just a block north) had also been completed. Philadelphia City Archives, photo 5897. 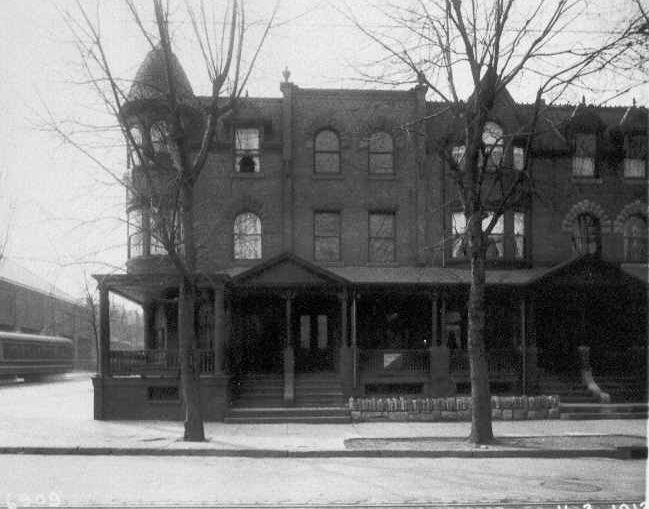 Subtle clues that this is a more "modern" row are the classical columns, softened lines on the tower roof, and the emphasized semi-circular window openings. Philadelphia City Archives, photo 6909, 1913.

The area continued to be home for many charitable institutions as well, such as the Home for the Incurables, and a home for blind men. One of the traditional advantages of being on the periphery of the city was that the land was generally cheaper than in the city center, and rarely did buildings need to be knocked down for new construction. It was also during the 1890s that Anthony Drexel established Drexel Institute, a technical college, on Chestnut Street only a few blocks from his own home. However, some green spaces remained by happenstance or by design. For example, near the 49th Street train station was the Belmont Cricket Club.

At the same time, commercial and industrial areas did not disappear, and in some cases grew. The banks of the Schuylkill River became a site to behold. Not for its beauty, but for its industrial waste. Many of the forces that had helped shaped the growing suburb were also destroying it. Not surprisingly, currents of reform were on the way.

Signs of the Times 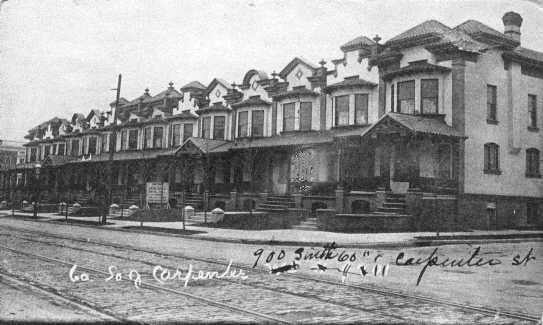 Signs of the Times

This row is an attempt at incorporating the latest trends and maintaining some 'suburban' characteristics. Front fencing was dispensed with in favor of raised front yards, and the characteristics of the porches, chimneys, and other features have a rather heavy and rather applied look. It is likely that this row, like many developed away from the established core of suburban housing were designed by the builder rather than an architect. 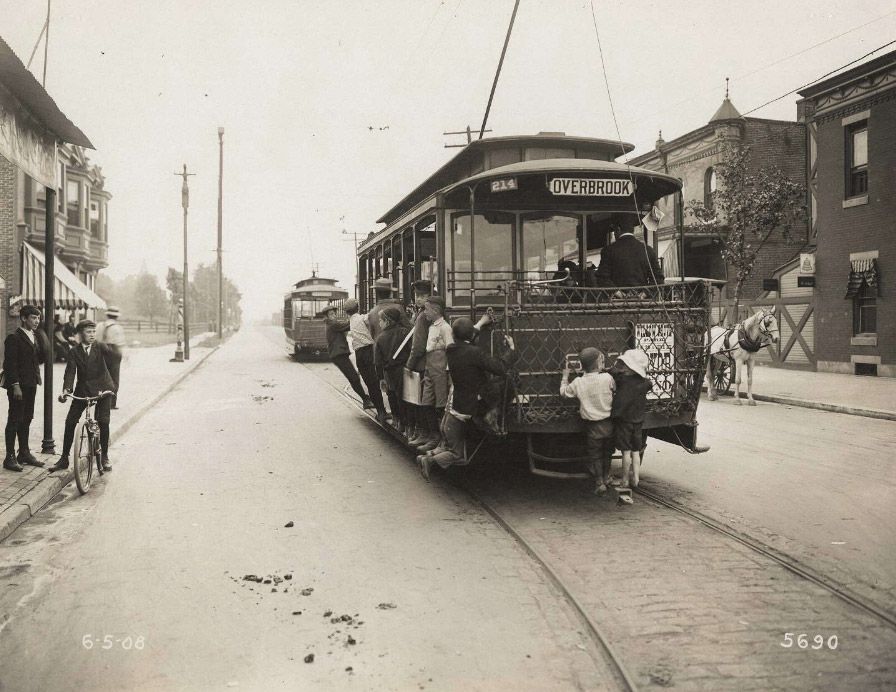 Trolleys to Overbrook pass by two-story row houses in 1908. The houses on the left side of the street have the type of bay windows that came into use around the turn of the century. And the lack of porches and setbacks on many of the houses suggest that the builders were on this corner were not concerned about suburban appeal.

Free Library of Philadelphia
Development Takes Command, Centennial Era
The City Beautiful and the Landscape of the Automobile