The Civil War pervaded all aspects of Philadelphia life; political, economic, social. However, the war's effect on real estate operations West Philadelphia has not been well studied. Certainly it did not immediately stop real estate operations as some have believed, and the violence that beset other cities like Baltimore and New York did not occur here. On the other hand, internal antagonisms effected governance and the threat of invasion loomed. During the war, the U.S. Army built two huge temporary military hospitals in Philadelphia to handle the wounded sent back from the front. One of these was in West Philadelphia and one in Chestnut Hill. The West Philadelphia hospital (renamed Satterlee Hospital) was located on the heights above Mayland's lower mill pond. Wounded were brought in by water, via. the Schuylkill river to a canal landing, as well as overland. This hospital was closed before the end of the war, but was undeniably a major presence while it was in operation. 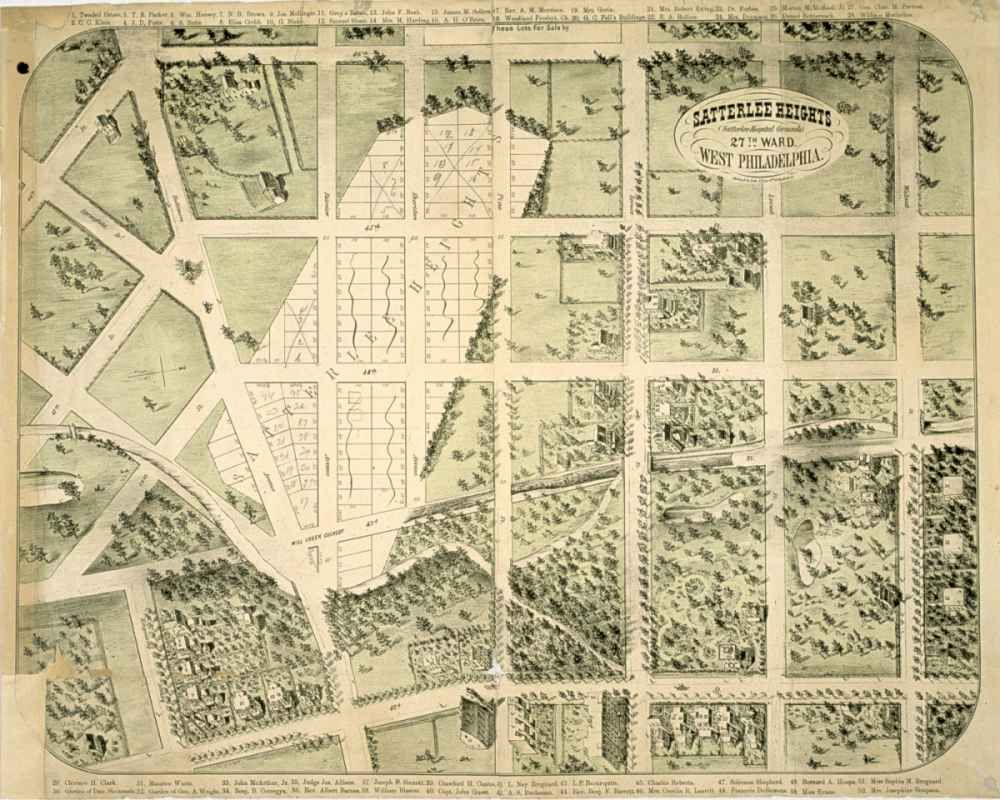 This promotional illustration captures the landscape on the cusp of rapid change. In the left foreground is a group of houses built in 1860 and designed by Samuel Sloan, whose influence was waning. In the background there are large old estates, like Twaddel's, who were selling land; and fancy new estates (front right) like Clarence Clark's, a buyer and financier of real estate development. From right to left runs the remains of Mill Creek which just 10 years earlier had been a major source of power. By 1869, it has been partially filled in and redirected into a giant sewer. Dominating the illustration's center is the former site of the Saterlee Army Hospital. The land has been divided into plots by a real estate syndicate that purchased the land and printed this lithograph. Clearly the syndicate hoped to impress buyers with the existing neighborhood. If the visual presentation was not sufficient, the named residents were an impressive list of who's who of West Philadelphia. These residents included: Samuel Sloan (architect), N.B. Browne (one of the speculators behind the houses Sloan designed), and John MacArthur (who became architect for City Hall). Ironically, this real estate venture did not succeed and many plots remained empty until the 1890s. Herline & Co. Lithographers [1869-70]

The end of the Civil War and the beginning of the 1870s introduced a new era in West Philadelphia's development as a suburb. It was a period of rapid changes and growth. There were changes in the types and designs of the dwellings. There was an increase in the variety and density of the construction. There was an influx of institutions to the area. Finally, paralleling all this was an expansion of services both private and public. Sewers, water, gas lines and paved streets along with the expansion of railroad and street car lines was crucial to support the expanding suburb.

One of the keys to expanding the scale of real estate operations was to be able to borrow more money. This was true for both the developers and buyers. For the former, the entry of members of Philadelphia's banking houses into the real estate market appears to have brought advances in financing as well as greater capital. For the home buyers, the answer came in the formation of savings associations that pooled money and then loaned it to members.

Two of the most influential bankers in West Philadelphia were Clarence H. Clark and Anthony Drexel. Clark was a speculator himself, buying and assembling plots of land. Many of the transactions involved Nathaniel B. Browne, who had developed blocks in the 1850s. In the 1860s and 70s, Browne seems to have focused more on conveyancing, leaving the construction end of things for Clark. Clark initially worked with directly various builders, however by the late 1870s, his properties are going to an intermediary, William S. Kimball, who actually develops them. At the same time, Browne was working to bring the University of Pennsylvania to West Philadelphia. His efforts were eventually rewarded, and the University bought land to build on in 1868.

Clark's initial investments appear to be personal. However as a member of a large and successful private banking house, it is possible the bank was making loans or backing Clark. In 1876, Clark opened a new West Philadelphia bank, Centennial National. Real Estate announcements in the 1880s suggest that this bank was providing cash or mortgage loans to developers. This would further suggest that Clark, and perhaps other bankers had seen that they could profitably finance construction on their own and other properties. Furthermore, by using a chartered bank, there was less personal risk.

During this period, it was not yet a common practice for banks to provide mortgages to help people purchase houses. A person or family could either rent, rent with an option toward purchase, or purchase outright (perhaps obtaining a personal loan). One solution that developed in Philadelphia was the loans association. In these associations, members would contribute regularly to the fund. When a member wished to purchase a house, the association would review their credit and provide a loan. This made home ownership available to a broader spectrum of people than had been previously possible. In the ensuing decades, these associations were credited to helping make Philadelphia a "city of homes". While there was squalor and ghettos, nothing equivalent to the tenements of New York existed.

In the same spirit of the previous generation of speculators, the new developers also lived amongst their creations. Clark, Drexel, Browne and most others built houses for themselves and lived in West Philadelphia. So, it is little wonder they worked diligently to maintain the character of their creations. A description in 1875 noted "This neighborhood is now, and must ever remain a lovely blending of all that is most beautiful in city and country". The developers continued to insure their streets remained free of shops, the houses were set back from the sidewalk, and porches, fenced yards, and trees lined the streets. Deed restrictions, covenants (and much later, zoning) often were employed to retain these characteristics. Sometimes their houses had to share the block with pre-existing working class homes, but generally this was avoided.

Not all of West Philadelphia was developed this way. The areas along the eastern part of Market Street remained a mix of commercial, retail, and industrial. Mills and factories also existed at Angora and in Eastwick for example; while farms and estates continued to operate until swallowed by a real estate operation. Nor was it just dwelling houses being built. Besides the University of Pennsylvania, other institutions saw the advantage of cheaper land, and healthier surroundings outside the city center. Many of these were societies to help poor, orphaned, and the aged.

A big influence on the area was the Centennial Exposition. This fair covered much of what is now West Fairmount Park. Throngs of people came to see the buildings, grounds, and exhibits meant to show off the nation's latest and greatest as well as its heritage. To handle all these people, the railroads and street car companies laid new track and expanded services. A new terminal was built at Market Street. Almost across the street, at 32nd and Market Streets, was Clarence Clark's new Centennial National Bank (still standing). For the bank's architects, Clark chose Frank Furness and George Hewitt. 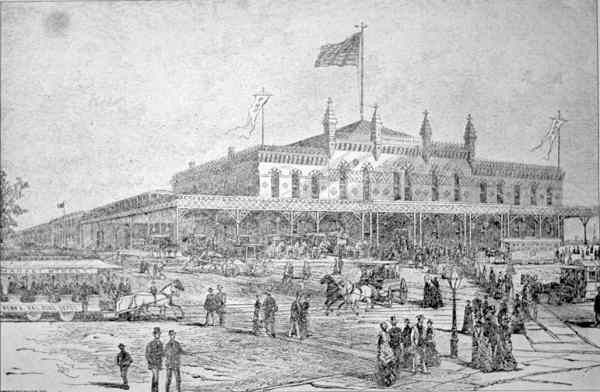 The bank's architecture indicates Clark was associating himself with a new generation of architects working in Philadelphia. By 1870 the era of Samuel Sloan was drawing to a close. It was the beginning of what we frequently call Victorian, and what they generally called Queen Anne or Modern. While exhibits about colonial America at the Centennial Exposition are credited with sparking a rival in colonial style, it would be almost two decades before that aesthetic would make its way into West Philadelphia architecture. However the mid-1870s do appear to be the turning point for architects in Philadelphia in terms of training and design. The 1860s had already seen an adoption of Gothic and Second Empire for houses, but in a rather literal and some would say superficial way. Instead what became practiced was rational planning mixed with design that explored surfaces, color, and motifs. In this way historicism and natural forms were used freely, and one can sense an overall preference for the sublime. 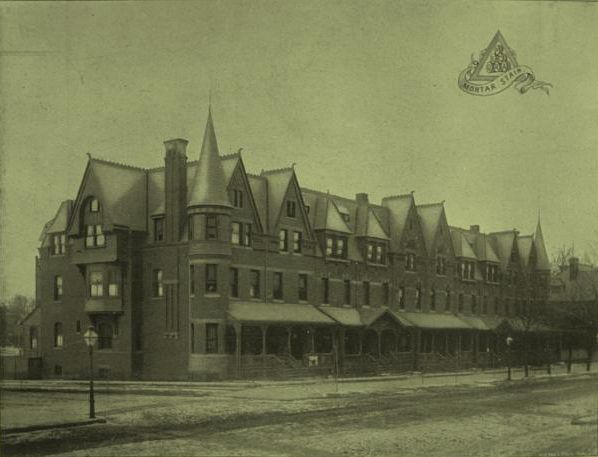 William S. Kimball described himself as a "real estate man" and was one of Clarence Clark's primary intermediaries. Like many of Kimball's 1880s operations, the design of this row has been attributed to the Hewitt Bros. This advertisement illustrates how the blocks continued to be thought out as a whole streetscape, although the architecture has radically changed. The suburban amenities of setbacks, porches and fenced yards remained a virtual requirement.

The block still stands on the west side of 42nd Street, between Spruce and Pine, albeit mostly shorn of its defining architectural features. Most ironic of these of incongruous alterations is recent repointing with white cement, completely negating the effect the Mortar Stain Company so proudly promoted in this advertisement.

One of the most basic changes of the new era was the appearance of the row townhouses, albeit suburbanized. This was accompanied by filling in spaces left open in the older parts of West Philadelphia and opening smaller streets between the larger ones. All of this increased the density of the new suburb. Single family houses and twins continued to be built, but primarily on the edges and on larger streets.

In the late 1860s townhouses had a more urban, and therefore upper class appeal, compared to say a village house. But in keeping with suburban setting, these townhouses were often built with porches and yards. Their exteriors and interiors reflected fashionable materials and designs. Together, these characteristics would further separate the suburbanized townhouses from the existing working class rows nearby. It should be noted that mansions still abounded. In 1875 it was remarked "Fortunately, Chestnut Street and its neighbors to the south have been almost completely monopolized by the suburban residences of wealthy citizens, who have adorned their homes with spacious grounds, with trees and flowers and have planted shade trees along the streets..." 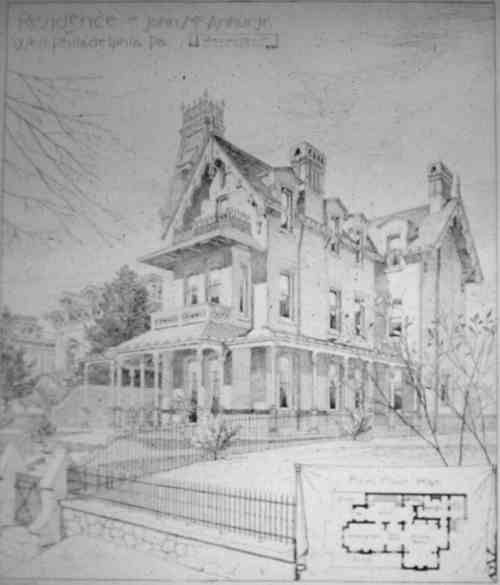 McArthur is best known as architect of Philadelphia City Hall. This sketch and plan of his own West Philadelphia house demonstrates his command of the latest domestic architectural trends as well. "House of John McArthur," Scientific American. June 18, 1881.

Commuter service was one determining factor of where the new suburban development successfully occurred. Most of this was dictated by the street car lines. According to their own accounts, the real estate men of West Philadelphia were lobbying for more rapid transit and succeeding. However, regular railroad service also played a role. For example, Powelton's proximity to the main terminal made it quite convenient to residents. An even more striking example was the emergence of a community around the 49th Street Station that jumped ahead of the general expansion west from old Hamiltonville.

Emergence of the Suburb, the 1850s
The Success of Trolleys and Electrification