Philadelphia started as a city within the county. The county stretched from the Delaware River on the East to Cobbs Creek on the West. During the eighteenth-century the City of Philadelphia remained concentrated along the Delaware River (today's "Old City" & "Society Hill"). Outside the City proper, the county was divided into Townships and Liberty lands. Kingsessing and Blockley Townships were on the West, split from the rest of the county by the Schuylkill River. This river could only be crossed by ferry or boat; which seems to have discouraged settlement. Nevertheless, by the 1750s there were some country estates, farms, and along the fast-running streams, a few mills. 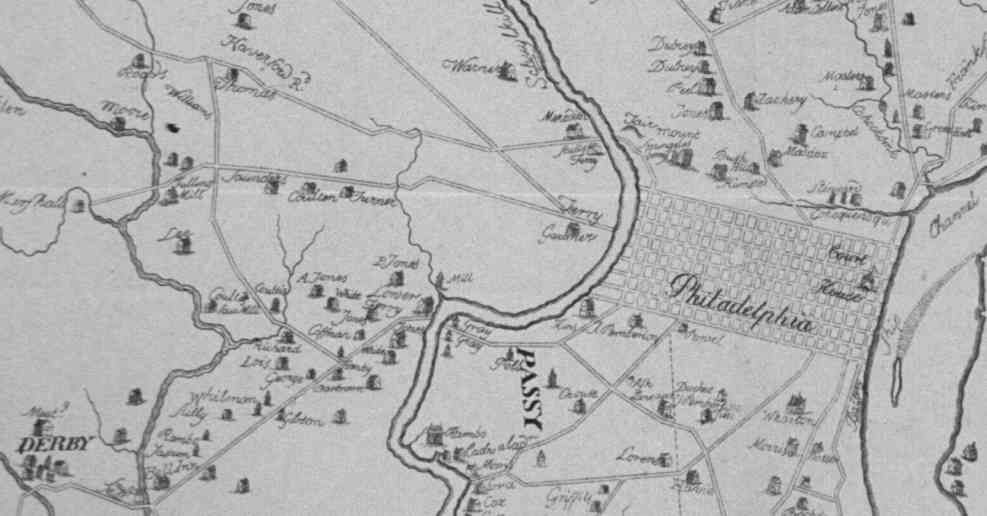 In this map section, the Delaware River is on the right (East), Cobb's Creek to the left (West), and the Schuylkill River runs vertically through the center. The Schuylkill's three main crossing points are (from top to bottom): the Upper Ferry, from Fair mount to the Haverford Road; the Middle Ferry, leading to the Lancaster and the West Chester Roads (the latter essentially a continuation of High/Market Street); the Lower or Gray's Ferry, connecting to the Darby Road (now Woodland Avenue starting at 49th Street). While Philadelphia City is shown as a grid between the Schuylkill and Delaware Rivers, this was intended only to illustrate the plan. In reality, the City existed only along the Delaware.

The Schuylkill River was a barrier to both overland and waterborne transportation. Above the fall line, roughly East Falls today, boats had to wait for surges, known as freshets, to raise the water level enough to carry them over the rocks. Since the occurrence of freshets depended on snow melts and rain, the effective use of the Schuylkill to and from points north and west of the city was problematic. Crossing the river was at least more reliable. There were three main ferry crossings near the city and a fourth just a little upriver. These ferries connected to the primary roads heading west and south. From Gray's Ferry to the south was the Darby Road, the main land route to the southern colonies. To the West was the Lancaster Road. It started near the Middle Ferry and could be accessed from the Upper Ferry by the intersecting Haverford Road. However, these overland routes were not well made or maintained and the ferries charged a toll.

An East View of Gray's Ferry, on the River Schuylkill

An East View of Gray's Ferry, on the River Schuylkill

The wide Schuylkill River presented a major obstacle separating the western portion on Philadelphia County from the eastern. Shown here is the main southern crossing point with a rope line for the ferry boats as well as a floating pontoon bridge. Pontoon bridges were first used on the Schuylkill for military operations during the American Revolution and could be swung open for boat traffic.

By the end of the 18th century, there were a growing number of farms, country estates, mills, and trade centers in Blockley and Kingsessing Townships, although fields, woods, and pasture continued to dominate the landscape. The availability of pasture was good for cattle being driven in for market; and the availability of wood was critical for a city almost entirely dependent on it for fuel.

Over time, it became apparent to the city's leaders that the difficulties with routes west could threaten Philadelphia's economy. This was because after the American Revolution, Lancaster County and central Pennsylvania were becoming centers of wheat production. Flour was one of Philadelphia's most important exports. The trouble was that people in central and western Pennsylvania found that routes to Baltimore were cheaper and more reliable. This made it harder for Philadelphia's merchants to compete. As a result, various schemes were proposed to improve the routes into the city. Eventually, investors backed the development of turnpikes, a canal along the Schuylkill River, and bridges across the Schuylkill River. However, the first improvements had occurred by chance during the Revolutionary War.

In response to military needs, floating bridges were built to supplement the Schuylkill ferries. These were in intended to be strictly temporary measures to speed movement of troops, supplies and military communications. Then during the 1777-78 British occupation of the city, such bridges provided improved access to gather supplies of forage and firewood from the west side of the Schulykill. Both of these necessities had become hard for the British (and city residents) to obtain. This was in part due to the sheer number of people in the British army, and in part because Washington's troops actively patrolled to the north of the city, and even the Jersey side of the Delaware River. However, they were unable to deny the British access to the western part of Philadelphia county and points south. After the war, floating bridges were put into regular use, particularly at Gray's Ferry, although they were occasionally swept away by floods.

Another improvement that occurred during the War for Independence was the opening of a road from the Darby Road to the West Chester Road (aka Market Street). This occurred in 1781 after the Americans regained control of Philadelphia. This new connection used an existing lane through William Hamilton's estate, The Woodlands. By making this lane public, traffic along the Darby road had the right to continue to the Market Street ferry and points north without having to cross at Gray's Ferry. Whether Hamilton was in favor of this or not, he had already had run into trouble due to his loyalist sentiments, and decided to keep his preferences regarding the road to himself.

Around the beginning of the 19th century, private investors made significant improvements in the routes west. The first was the opening of the Lancaster Turnpike in 1796. It was more direct and better built than the old Lancaster Road it was intended to supplant. By being better built and maintained, turnpikes made movement faster and more reliable throughout the seasons. Construction money was raised from investors, and then tolls were collected to maintain the road. In contrast, public roads depended on the public to maintain them (frequently those residing along the road). The turnpike tolls also were used pay off the investors. The Lancaster Turnpike did well and generated profits for its investors for some 40 years.

Of equal importance to the new turnpike was the construction of "The Permanent Bridge" at Market (High) Street. Completed in 1805, it guaranteed reliable access across the Schuylkill River and was considered a marvel of engineering and construction. However, like the turnpikes, the bridge was a private venture and tolls were charged by the bridge company. In 1839, the City decided it was in the public interest to buy the company out and ended the tolls. Attempts to replace the upper ferry with a permanent bridge were not as successful. A chain bridge that was built near today's Spring Garden Street in 1808. It then collapsed a few years later under a load of cattle, and its immediate successors did not fare much better.

By the end of the 18th-century, small trade centers had sprung up; most notably along the Lancaster Road as it approached the High Street (or Middle) Ferry. Drover's yards (for livestock), hotels and small businesses related to such commerce were the centers of these communities. Remnants of such market business survived well into the 20th century. Driving the development of these trade centers was continued availability of natural resources and the convergence of access routes to points west and south. Improved access would also further encourage industries such as lumber, milling, and later; ice operations, lead and finally paint manufacturing. Around these rural industries small industrial villages would emerge.

Simultaneously, there was also growing interest in the West Philadelphia as a picturesque place. For years, the most prominent families had country houses as well as city houses. By 1800, this number was growing, and soon more houses on appeared on the hills overlooking the west bank of the Schuylkill. Many were intended as weekend or summer retreats from the heat and occasional epidemics that swept the city. At the same time, a rising standard of living for many city residents allowed them an occasional day trip to the countryside.

One of the late 18th century country houses on the west bank of the Schuylkill River was John Penn's 'Solitude.' It was meant to be a quiet place and so it was for a number of years. Today it is in the center of the Philadelphia Zoo where it serves as administrative headquarters.

Today, traces of the 18th and early 19th century West Philadelphia can be still be found. In many cases this was due to their continued interest into the 19th century as destination points. Some were homes of major West Philadelphia landholders. These include The Woodlands of William Hamilton, fellow botanist Bartram's Gardens, and Judge Peter's Belmont. The Blue Bell Inn is now a city owned historic site, and St. James Church is still in use. More mundane 18th century structures are occasionally identified amongst their newer neighbors in the grid. While, the "bowl" in Clark Park is about all that remains of the mill ponds that provided power along the many streams now buried underground, the major roads and river crossings have only slightly been realigned. Cobbs Creek is partially protected by City parkland, and Fairmount Park protects the Schuylkill north of Spring Garden Street, along with many houses from those who built river estates.