Exhibit by University of Pennsylvania students and faculty, 2009 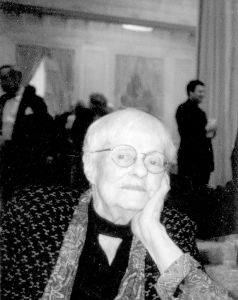 Ruth Branning Molloy, 2001
University Archives | University of Pennsylvania
Ruth Branning was born on July 24, 1910, in the Bronx, New York. As a child she moved several times with her family between New York, New Jersey, and Philadelphia. In 1922, her family finally settled in West Philadelphia when her mother was hired as a teacher there. As a teenager, Ruth attended West Philadelphia High School for Girls. She graduated at age fourteen, the youngest graduate in the school’s history. After taking a year off, Ruth enrolled in the School of Education at the University of Pennsylvania in 1926.

During her undergraduate years at the University of Pennsylvania Ruth was very involved in university life. During her freshman year she served as freshman class vice president, chairman of the freshman commission, and she joined Kappa Kappa Gamma fraternity. In recognition of the broad range of her extracurricular service, Ruth was inducted into Sphinx and Key, a junior honorary society, Bowling Green, a honorary dramatic society, and Gamma Tau, a honorary journalistic fraternity. She was also the editor-in-chief of the 1930 women’s yearbook, the Record. In 1930, at age nineteen, Ruth Branning graduated from Penn with the degree of Bachelor of Science in Education.

Shortly after graduation from Penn, Ruth Branning landed a job at The Philadelphia Inquirer, where she was employed from 1930 to 1932. At the Inquirer, Ruth worked as editorial assistant in the library and researched material for "Everybody’s Column" as well as "100 Years Ago." Ruth also helped to build the department’s reference file. It was here that her interest in Philadelphia’s history was first stimulated. While working at the Inquirer, Ruth met Joe E. Molloy, a librarian. A romance ensued and they were married in 1932. 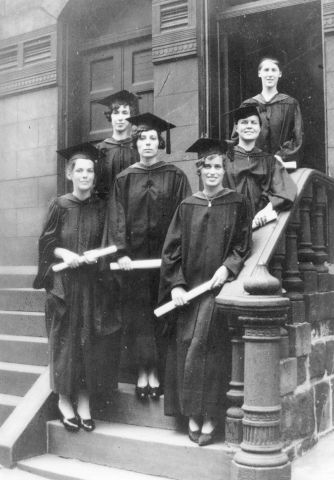 University Archives | University of Pennsylvania
Ruth and Joe made their home in West Philadelphia, where they became the parents of three children, all daughters: Brenda, Mari, and Ellen. Both Ruth and Joe loved West Philadelphia and were students of its history. They lived happily for more than twenty years at 3822 Locust Street, but in 1968 the Redevelopment Authority of Philadelphia purchased their home and many others to make way for the University of Pennsylvania’s westward expansion beyond 38th street. The Molloy family then moved to 200 St. Mark’s Square, where Joe and Ruth lived until their deaths, in 1979 and 2002, respectively.

Ruth Molloy was an avid photographer, poet, and writer. Her love of poetry started at a very young age; she wrote her first poem in 1913 at age three. During her lifetime, Ruth wrote essays, poems, and other articles for publication in magazines and newspapers such as The Saturday Evening Post, The Philadelphia Inquirer, The Evening Bulletin, Mademoiselle, and Good Housekeeping. She also took photographs which were published as photo essays. Her story, "Twenty Below, at the End of a Lane," a fictionalized account of her childhood, was printed in Mademoiselle and included in The Best American Short Stories [of] 1956. She was a regular contributor to Penn’s alumni magazine, The Pennsylvania Gazette, and became the first female chair of the editorial board of the General Alumni Society of the University of Pennsylvania. In 2000, her book of poems, Finally, illustrated with her photographs, was published by Sutter House.

Along with her hobbies of writing and photography, Ruth Molloy was an avid collector of both common and odd objects depicting urban life. These extended from tin cans to radiator grills. Ruth had an unusual eye and found beauty in things others might not notice. She would create artistic pieces from the many objects that she found. She hated to throw things away and blamed that habit on living during the Depression. According to one of her daughters, Ruth had hubcaps nailed to the front of her house for a number of years. After a while, Bentsen said, "It looked normal. Her radiator grills were actually quite decorated and beautiful. Ruth would not cross a street that had a smashed tin can in it without picking the can up for future use. It was usually used."

Biography by Jessica Tollete, University of Pennsylvania Class of 2009