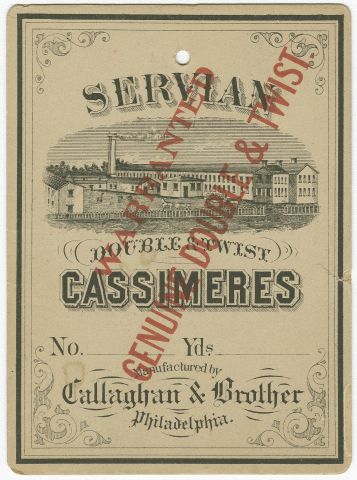 Tag from Callaghan & Brother mill, c. 1900
Ed Vinnacombe
My name is Edward John Vinnacombe. This story begins with an original 3x4 inch product tag which would have been attached to any one of the many cotton, woolen, or cashmere products produced by the Callaghan Brothers textile mill between 1863 and 1898.

Following the death of my uncle Robert W. Callaghan in the 1990s, my aunt passed along to me the Callaghan Brothers product tag and a 18 karat gold pocket watch from Liverpool, England. I was told that these items were all that remained from my great grandfather, Robert Callaghan, who along with his brother George, built a large complex of textile mills that once stood along the Baltimore Turnpike in West Philadelphia. This property was located below 60th Street and extended to the Cobbs Creek.

My curiosity was certainly piqued but as I was working in a busy job on Wall Street in New York at the time, I placed the watch and product tag safely away. After I retired in 2002 and moved to West Chester, PA in 2017, I had more time and opportunity to think about this curious inheritance. One day I retrieved the watch and product tag and began to research everything I could find about my great grandfather Robert, his brother George and the Angora neighborhood and textile mills which they built.

As with most people, my research began with Wikipedia which provided some general information about Angora, the neighborhood founded by Robert and George. The neighborhood extended to areas north, south and west of 58th Street along the Baltimore Turnpike towards Cobbs Creek and a grove of trees known as Sherwood Forest. The neighborhood was named Angora, probably after the angora goat. The wool from this goat was used to produce cashmere.1 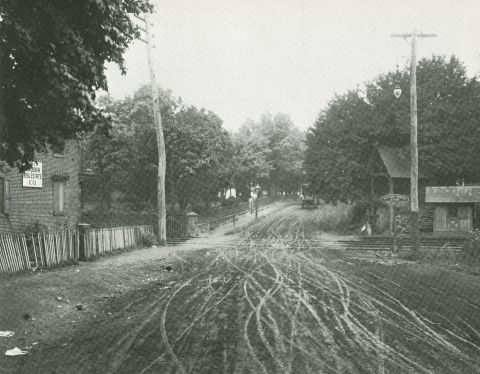 Angora train stop, 1906
Still Philadelphia, Frederic Miller
George Callaghan, Sr. and Mary Richmond Callaghan arrived in Connecticut from Scotland in 1827. Mary was Scottish and George was Irish, born in Deanmand, County Tyrone. Their son, George, was born in Scotland and was two upon their arrival in America. His brother Robert was born in 1836. The family settled in the Philadelphia area in 1838 and George started a carpet factory first in Philadelphia and later in Rockdale, Delaware County. The property which was later to become known as Angora was purchased by George, Jr., and Robert from the heirs of David Snyder.2

The brothers George, Jr., and Robert entered the textile business on a small scale in 1856, with a cotton mill that stood at 61st Street and Baltimore Turnpike, close to the terminus of the Septa Trolley in West Philadelphia. In 1863, they began construction of a much larger mill on the south side of the Baltimore Turnpike. This mill was completed in 1864 and was enlarged in 1866 and 1884. The original cotton mill was incorporated into the larger complex. Woolen and cashmere products were added to their line.3

Along with the new mills, the entire Angora neighborhood was constructed. It consisted of 55 houses for mill workers, the Angora Baptist Church, a store, barn, stable, reservoir, pump house, coal yard, railroad siding, and various support buildings. Large tracts of land surrounded the neighborhood making for a pleasant place to live and work.4 Coal was shipped in from West Chester over what is now the SEPTA Media-Elwyn railroad tracks. The existing Angora train stop at 58th Street is named for the Angora Mills. The 1909 photo of the Angora train stop shows the fence surrounding George's mansion and property.5 Robert lived in Paschallville near Cobbs Creek.6 The brothers also had a business office at 48 S. Front Street in Philadelphia, most likely for displaying mill products and for meeting with potential clients.

As the mills expanded to peak production, they did a business running into the millions of dollars each year and were considered to be among the best in America as far as equipment and surroundings were concerned. They employed between 450-500 operatives.7 George had three sons and three daughters. The sons were all connected to the business. 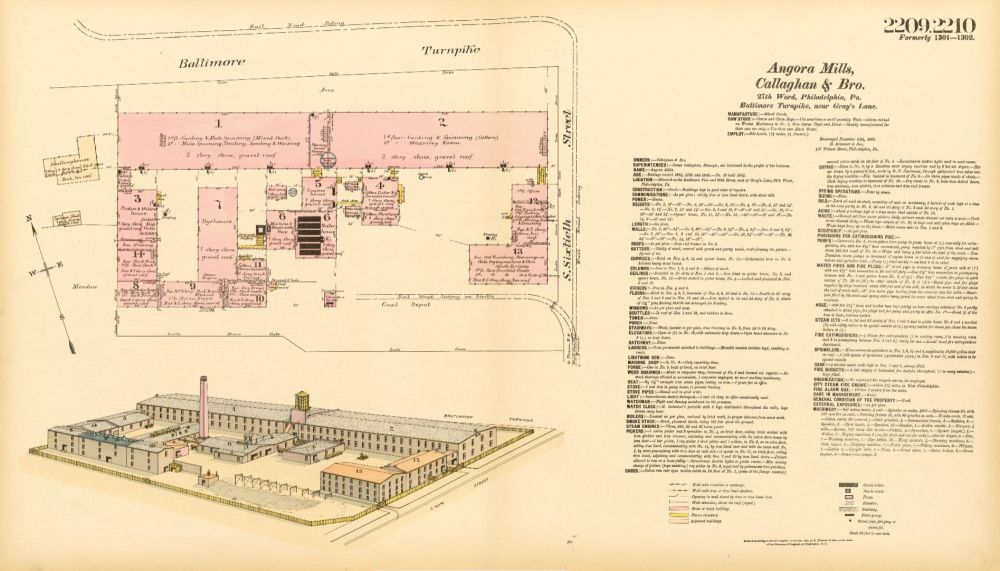 In addition to the mills, George was active among baptist organizations in Philadelphia. He helped to establish a Baptist church at Angora. He also served on the board of trustees for Bucknell University from 1876 to 1891.

George passed in 1891, while returning from his city office location. 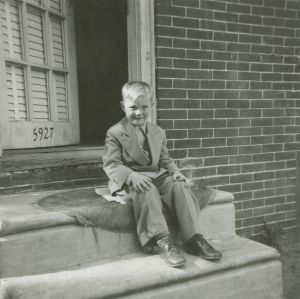 Author on the front stoop of the mill house at 5927 Angora Terrace, c. 1950
Ed Vinnacombe
The 1890s were a decade of worldwide depression. This, along with government imposed tariffs on textile mill products, caused severe financial hardships on most textile mills in Philadelphia and surrounding areas. Robert was left to deal with all of this on his own. The mills closed shortly after in 1898.8 The mill properties were placed in the hands of the local sheriff and were put up for sale. The mills, associated properties, and vast surrounding acreage were purchased by Reverend Bernard MacMackin, a leading Baptist clergyman in the city. According to an article in the Philadelphia Inquirer, the purchase was a personal matter which the Reverend refused to discuss. His wife was a relative of the Callaghan family.9

George's mansion was razed in 1912. Robert passed in 1922 at the age of 85. The individual mill houses remained. In the following years, they were either rented or sold. I lived at 5927 Angora Terrace adjacent to the old mill site until shortly after 1950, the year my mother, Dorothea Callaghan, died due to complications in childbirth. I was four years old at the time.

For many years, a large coal repository was directly across from Angora Terrace, parallel to the Media-Elwyn railroad tracks. Church Street was renamed Redfield Street at some point, probably after the Angora Baptist Church was vacated. I remember walking along the railroad tracks with my brothers, between Angora and 49th Street, where I attended kindergarten at Harrington Elementary School.

I have vague memories of my grandfather, another Robert W., who lived with us in the mill house until my father later remarried. My father and new stepmother, along with my brothers Ron, Walt, John and new stepbrother Phil, moved to East Lansdowne. There we welcomed a new brother, Gary. I finished high school, served in Vietnam, and graduated with a Masters Degree from Penn State. I later moved to New York City where I worked on Wall Street for over 20 years.

Most of the mill housing remained until the center of the neighborhood was raised for the existing John P. Turner Middle School. A few of these houses still exist to this day, along what is left of Angora Terrace. 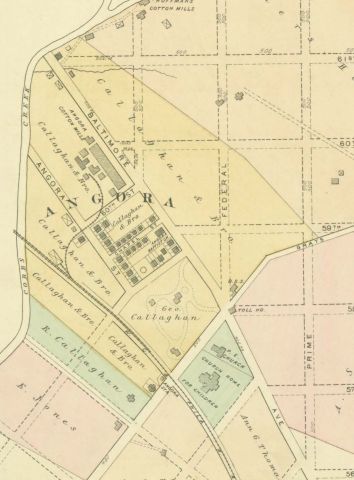 Angora Street as shown in G.W. and W.S. Bromley's Atlas of West Philadelphia, 1927 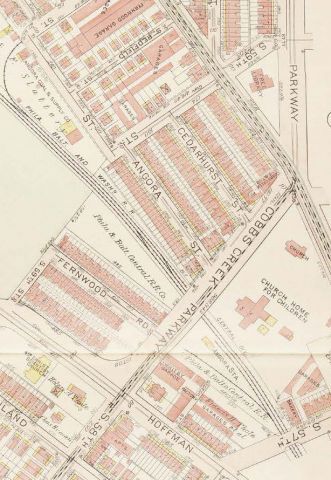